Trade statistics released this month by the U.S. Department of Commerce show that California remained a top exporting state in 2020.

California’s top five export markets remained the same in 2020, in order: Mexico, Canada, China, Japan and South Korea. There was some shuffling with the next five export partners to round out the top 10. Taiwan became California’s sixth largest export partner, followed by Germany, Hong Kong, the Netherlands, and India breaking through to take the 10th spot.

• Exports from California to Mexico totaled $24.078 billion in 2020, maintaining the country’s spot as California’s top export partner. Exports decreased by 13.895% compared to 2019.

• Canada remained California’s second largest export destination with $15.92 billion in exports. Exports to Canada decreased by 4.63% in 2020 compared to 2019. 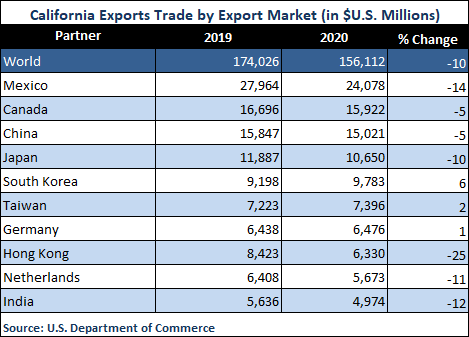 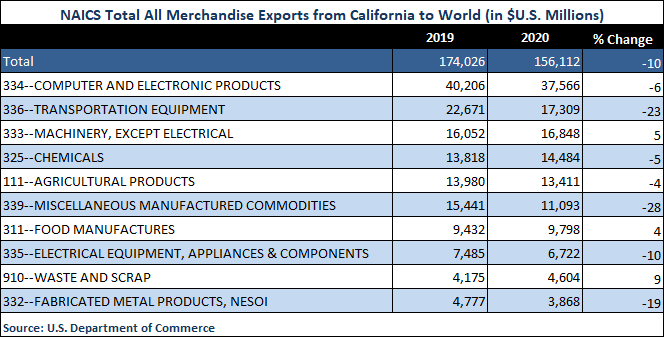 Exports in California’s top category, computer and electronic products, decreased by 6.56% to $37.56 billion, the lowest in the last decade. Transportation equipment exports also decreased by 23.65% totaling $17.3 billion in 2020. Exports of petroleum and coal products decreased 41.88%, totaling $2.8 billion in 2020. Exports of textiles and fabrics, along with leather and allied products, decreased 22.52% and 33.35%. Exports of nonelectrical machinery and chemicals, however, increased 4.9% and 4.8%, respectively.

California is one of the 10 largest economies in the world with a gross state product of more than $3 trillion. International trade and investment are major parts of our economic engine that broadly benefit businesses, communities, consumers and state government. California’s economy is diverse, and the state’s prosperity is tied to exports and imports of both goods and services by California-based companies, to exports and imports through California’s transportation gateways, and to movement of human and capital resources.

Although trade is a nationally determined policy issue, its impact on California is immense. California exports to more than 225 foreign markets. Trade offers the opportunity to expand the role of California’s exports. In its broadest terms, trade can literally feed the world and raise the living standards of those around us.

The California Chamber of Commerce supports expansion of international trade and investment, fair and equitable market access for California products abroad, and elimination of disincentives that impede the international competitiveness of California business.