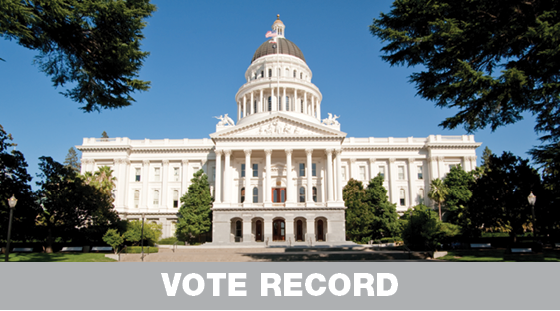 This is the 48th vote record the CalChamber has compiled in response to numerous requests by member firms and local chambers of commerce that would like a gauge by which to measure the performance of their legislators.

You can view these via links at www.calchambervotes.com.

Many anti-business bills were rejected by legislators in policy or fiscal committees, thus stopping proposals before they reached the floor for a vote. The vote record does not capture these votes.

Most bills in this report cover major business issues that are of concern to both small and large companies.

The CalChamber recognizes that there are many bills supported or opposed by business that are not included in this vote record and analysis.

• The bills and votes reflect legislators’ attitudes toward private enterprise, fiscal responsibility and the business climate.

• Each bill was a CalChamber priority in a particular field. Priority bills generally have appeared in the “Status Report” sections of Alert.

• The bills were voted upon by either the full Senate or Assembly. This year, the vote record covers 15 votes in the Senate and 17 votes in the Assembly.

When ‘Not Voting’ Helps

Sometimes a legislator is unwilling to vote against a colleague, but is willing to support the CalChamber’s opposition to a bill. In such cases, a legislator may abstain from voting, which will hinder passage of a bill, just as a “no” vote does.

To recognize that not voting can aid the CalChamber’s opposition to a bill, the vote record includes the number of times legislators did not vote “aye” on a CalChamber-opposed bill in the total for the column listing actions “in accord with” the CalChamber’s position, if the legislator was not absent for the day.

• AB 2133 (Quirk; D-Hayward) Arbitrary Greenhouse Gas Target. Arbitrarily changes the State’s GHG reduction goal from 40% of 1990 levels by 2030 to 55%. By the State’s own estimate this proposal will force 17 million gas-powered cars off the road in the next 10 years. Passed Senate, August 31, 21-10. Assembly refused to concur in Senate amendments, August 31, 37-22. CalChamber Opposed/Job Killer.

Housing and Land Use

• AB 2183 (Stone; D-Scotts Valley) Forced Unionization Process for Agricultural Employees. Limits an employee’s ability to independently and privately vote for unionization in the workplace and forces employers into union submission, by eliminating a secret ballot election and replacing it with card check or requiring employers to waive certain rights to proceed through an untested ballot procedure under which the ballot can be filled out by labor organizations. Passed Senate, August 29, 26-10. Assembly concurred in Senate amendments, August 29, 55-18. Signed — Chapter 673. CalChamber Opposed/Job Killer.

• SB 1044 (Durazo; D-Los Angeles) State of Emergency. Allows employees to leave work or refuse to show up to work if employee feels unsafe regardless of whether employer has provided health and safety protections. Subjects employers to costly Private Attorneys General Act (PAGA) lawsuits if they dispute the employee’s decision or need to have another employee take over any job duties. Job killer tag and opposition removed due to August 15, 2022 amendments narrowing the scope of the bill and recognizing existing health and safety regulations. Passed Senate, May 25, 24-10 (vote shown). Passed Assembly, August 22, 50-18. Senate concurred in Assembly amendments, August 24, 29-10. Signed — Chapter 829. CalChamber Neutral/Former Job Killer.