Did you know that in Wintu, the river that runs through Redding is called Bohema Mem, meaning “great water”. Spanish explorer, Gabriel Moraga, named it Rio de los Sacramentos (River of Sacraments) in 1808. Eventually it was shortened to the Sacramento River. I know that another word for sacrament is “gift”, and it is this beautiful, natural treasure that is at the center of two significant proposals in Redding at this time. 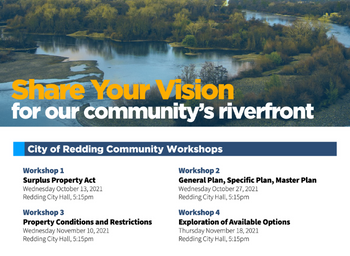 When the Redding Chamber of Commerce and its Forward Redding Foundation asked the community to share ideas for improving the image and reputation of Redding through the Redding City Identity Project, a large number of the 700+ ideas involved redeveloping Downtown Redding and the city’s Sacramento riverfront. Downtown Redding has received a lot of attention over the past few years and for good reason. It isn’t often that hundreds of millions of dollars in projects pour into one part of town and completely transform it. That is what we will continue to see in the foreseeable future.

But what about the Sacramento River?

At Redding’s southern gateway, the Redding Rancheria has been working for years to relocate its casino and hotel to the “Strawberry Fields” property just south of the South Bonnyview freeway interchange along the river. Last year the attempt to move the property into trust of the federal government to the benefit of the local Tribe stalled out and the project was put on pause. That recently changed. With her appointment under President Biden, Deb Haaland made history as the first Native American to serve as the Secretary of the U.S. Department of the Interior. Secretary Haaland has significant influence in the outcome of projects such as that of the Redding Rancheria. To that point, the Rancheria released an announcement late last month that the United States Department of the Interior has formally reported in the Federal Register that it is renewing its consideration of the Draft Environmental Impact Statement (DEIS) for the I-5 Casino Relocation Project.

A few miles by jet boat up the river, we come to what is being called “Redding’s Northern Riverfront” according to the development partners (K2 Development Companies, The McConnell Foundation, Populous, and Turtle Bay Exploration Park) involved in submitting an unsolicited proposal to the Redding City Council regarding another significant possible riverfront redevelopment. In this case the properties in question are public property. The 45 acres encompass the Civic Auditorium and the Redding Rodeo Grounds. According to those involved with the proposal, they come to the table without any preconceived plans for what they refer to as a “blank canvas”. The community is being asked to learn more about the proposal, give input, and remain involved throughout the process. By the way, it is estimated that it would be more than a decade before anything were to come to fruition at this location, so this is truly a long term visioning opportunity. The first of four community workshops is occurring this evening at 5:15 p.m. at Redding City Hall City Council Chambers. For more information as well as to view the workshops virtually, please click HERE.

Undoubtedly, each of these projects will bring out many opinions and perspectives. We know they will have a significant impact on the future of the Redding community. The Chamber will keep you updated on what becomes of the property next to the great water of the mighty Sacramento – a gift hiding in plain sight.
Jake Mangas
President & CEO
Share this article >>

PrevPreviousJake’s Takes: One of the Greatest Stories Rarely Told
NextThere’s a New Sheriff in TownNext