35 Years of Hope and Transformation

There are about 90 (or so) non-profit members of the Redding Chamber of Commerce. These organizations vary in size and mission and all of them help contribute to the overall health of our community, for that I am extremely grateful. As some of you know, I came to the Chamber following a decade of dedication to one such non-profit – Northern Valley Catholic Social Service (NVCSS), and I wish to share with you my take on what I believe has been a remarkable journey of growth, transformation, and hope. 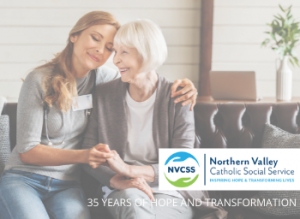 NVCSS or “the agency” as it has been known in some circles, is technically part of the social service arm of the Catholic Church, but it has always been about the need, not the creed. That said, it is hard to not think that a divine hand has been involved in the organization’s success, or at least, what can be built when the right people are involved at the right time. The organization was founded in 1986 under the leadership of visionary executive director – Pat Modzrejewski – whose passion and enthusiasm led to early grant writing wins, a modest office on the corner of South and Court Streets in Redding, and the beginning of a program that served pregnant and parenting teens. I recall sharing the backseat of our 1980 Volvo with a young mother and her baby following her appointment at Pilgrim Congregational Church as my mom was one of the early volunteers in this program. Following the formative years of NVCSS, which saw growth in mental health counseling services, it became apparent that housing was an unmet need in our community.

Enter the second executive director, Jan Maurer Watkins. Jan came out of the City of Redding’s housing department and, together with people like Housing Director Bobbi Sawtelle, was able to grow the Agency’s impact in providing housing in Shasta, Tehama, Butte, and Trinity Counties. Jan’s expertise and tenacity helped NVCSS become one of the leading non-profit organizations in the north state, further expanding to a 6-county region including Glenn and Siskiyou Counties. Additionally, she was at the helm leading the organization through a capital campaign with Jeff Finck as the first Director of Development, that enabled most Redding-based services to be administered from a central location at Washington Plaza, located off Park Marina Drive at 2400 Washington Avenue. Jan departed NVCSS and returned to the public sector in 2007.

The Great Recession hit the north state hard. At a time when the organization needed someone with an acute awareness of fiscal management, Don Chapman, previously the agency’s CFO, a CPA, and well-known in local banking and forest products, took over as the third executive director. These were very trying times for many in the non-profit business community. Yet, NVCSS continued to grow during the “Chapman years”. Don’s steady hand, prudent management, and quiet demeanor helped many to stay the course and not let economic conditions facing the nation at that time adversely affect the job that needed to be done. Don passed away following a long and courageous battle with cancer on July 28th 2014.

I can recall attending a Catholic Charities USA conference in Charlotte, NC one year in which there was an emphasis on the role local affiliates can play in disaster response. It seemed almost laughable at the time to think of a natural disaster in the north state. Sure, many of us had lived through the Fountain Fire of the early 90s, but to think of hurricanes, floods, earthquakes, tornadoes, etc., those things happen in other places, not here, right? In the years to follow my thoughts were proven to be way wrong. Thank goodness for Cathy Wyatt, the fourth, and current, executive director of NVCSS. Beginning with the early response to the Boles Fire in Siskiyou County, through the Carr Fire in and around Redding, to the Camp Fire in Paradise, and now the Dixie Fire, Lava Fire, Salt Fire and likely more to come, it has been NVCSS that has been called upon to provide case management, mental health services, and more, for people dealing with the after effects of the trauma of losing their homes and their communities of support. Cathy is a Licensed Clinical Social Worker and has been with NVCSS in two separate stints, the most recent since 2008. Once again, her skillset has been exactly what was necessary to guide the organization. Cathy and I shared many car rides to and from Weaverville, Hayfork and Douglas City, when we were helping local Trinity County volunteers to build programs to serve the impoverished in communities there. Her heart is fullest when she is able to help people work through their challenges, and when she is hiking in the Trinity Alps!

There have been many who have helped to weave the tapestry of service throughout the history of NVCSS, but one common thread – Dr. Dave Gasman – has stood out as most prominent. The Upper Peninsula Michigan native, came to Shasta County to be its Mental Health Director many decades ago. It was Dr. Gasman who was a key part of the initial group of people who helped to form the organization. At Redding’s State of the City, when Ken Murray was mayor, many youth in our community were encouraged to attend. It was suggested that at the conclusion of the event, they approach any of the business leaders in attendance and vice versa and introduce themselves. Dr. Gasman met a teenage girl whom he gave his NVCSS business card to, which showed his volunteer title as chairman of the board of directors. The girl took one glance at the card and gave him an instant hug, a big squeeze, like one would give a close family member. Dr. Gasman asked the young lady why she was giving him this hug. She looked up to him with tears welling up in her eyes and said “Because three years ago you saved my life!”. Dr. Gasman never found out how NVCSS had saved her life. It could have been through mental health counseling, teenage pregnancy and parenting help, housing, foster youth services, Adopt-a-Family at Christmas, CASA, or some combination of these.

Dr. Gasman, I hope you are proud of what the organization has become, inspiring hope and transforming the lives of thousands each year – a magnificent living out of the gospel with deeds not words. Happy 35th anniversary, NVCSS!